Oct 30 Posted by Blades in Drums

The Pearl Mimic Pro is the newest electronic drum module to hit the market, with some being received as early as June 2017. I received my unit in August of 2017 and have spent a good bit of time using it, practicing with it, tweaking it, and most importantly, ENJOYING it!

There are plenty of articles saying WHAT the module is and the specs that go into it, so I don't want to repeat all of that here.  I want to give some feedback about the unit after having used it for the post two months.

It is a very easy to use device, but it's a lot different than many that have preceded it.  I have come from using Roland products in the past, starting with the original TD-10, expanding to the TDW-1 card, the TD-20, then the TDW-20.  I never moved to the TD-30, and when the new modules came out, I had to decide between going with the TD-50 or the Pearl Mimic Pro.  I decided on the Mimic because it is based on a much deeper set of samples and less on the electronic manupulation of them (i.e. COSM modeling).  I also am FAR more interested in a smaller set of really good sounding acoustic-like drum kits rather than the larger number of electronic samples, drum machine sound-alikes, and tons of sounds that I simply have never used over the years that I owned Roland devices.

One of the goals of the Mimic Pro is to approximate the sounds of well-recorded and engineered acoustic drums and I think that they have done an excellent job of this.  In the past, I've always accepted how great the Roland modules were because of the programming "trickery" they have been able to utilize to get things to sound better than the recorded samples actually were.  And, for as many VST instruments as there are out there that have sounded really good for years, I haven't really ever gotten great use of them because of the technical challenges of latency.  I have a rather older sound card (Echo Audio Layla 3G) with a modern PC, but even with really low latency drivers, I've never been satisfied with the feel of the sample sets, and the tweaking of the reaction to the pads/midi from the Roland drum brain has always left me wanting.  The Mimic Pro is the best of both worlds here: It has the great sample sets of the VST instruments with the convenience, stability, low latency, and trigger "tweakability" that I could never get down before.

The Mimic Pro has a touch screen interface with a LOT more showing on screen than any one of the screens on the Roland units, which makes this a much more approachable device than those.  You can select the instruments with a simple click, you can adjust all of the settings by dragging on their screen sliders or you can double tap the slider and use the hardware knob to dial in the detail.

There are separate mixers for both the Main Outs and the Headphones and there are individual Mic level changes if you are going Direct to a DAW, as I am, via the DB25 connector, which sends 8 individual routed outputs along side of the other analog outs.

Here are a few images of the Mixer, Home, and kit piece selections: 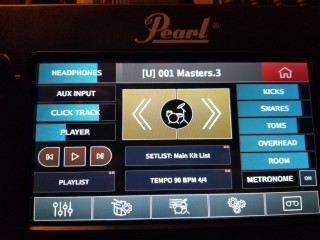 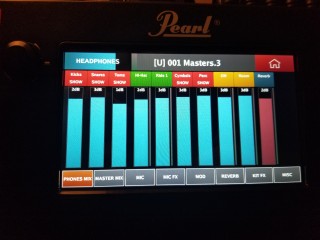 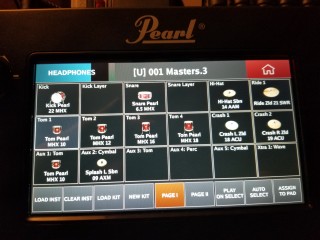 There are a ton of options for adjusting everything on this module.  Here are just a few of the items that stand out:

These are just the surface of the many parameters and combinations of all of these can take the expansive range of sounds into another dimension entirely.

What about the Sounds?

Everyone has their taste in drum sounds and the Mimic allows for a great variety.  The sounds are of a great quality too.  There are some examples where you can hear the noise of the mic or studio environment and individually these could sound "wrong" at first, but in the context of playing the whole kit as an instrument, it really isn't a problem.  Most of the sounds are very versatile.  They have obviously been recorded with a lot of care to get good sounding samples that are clean enough to be used in most applications and leave plenty of room for effects to be added later, whether with the onboard EQ, Compression, and Reverb, or later with other effects like distortions, phasers, and other less-standard effects.

The point is that these drums have been recorded to be very flexible in live or studio use.  They are not too "effected" like some of the other e-drums that we've all heard, instead going for something more pure that can be made to SOUND effected if needed, without the sacrifice of ALWAYS sounding that way.

You can check out a few of my other recent blog posts and those to come for some examples of playing this drum brain with and without external processing applied.  I will also share sonds that I've recorded using the Mimic more in context rather than as a standalone kit.

Conclusion: I Love this thing!

My Pearl Mimic Pro was a gift - 18th wedding anniversary to be exact.  I'm certain that my wife got SO tired of hearing about it as I awaited it arriving!  But the end-result of me getting this new brain is far more inspiration to PLAY again.  Even though I play mostly for my own entertainment and to share with friends and online communities, this brain has moved me to play more in the past two months that I've had it than I've played in probably the last two years prior - at least.

It sounds and feels amazing.

Every time I play, I'm left with a grin on my face and my head shaking in satisfaction of how great the module sounds and plays.

I will conclude here with a quick video walk-through to show some of the features that I've mentioned above.

I REALLY hope that this has been a useful review of this amazing new device from Pearl and that you will consider adding it to YOUR list of equipment to check out or own!

PLEASE - leave a comment or at least a quick REACTION below to tell me what you think.